Well we had quite the exciting interesting weekend...

Okay, so we have a freakishly large Bradford Pear tree in our front yard. When I say huge, I mean GIGANTIC. I have had people tell me that Bradford Pears are only supposed to live for twenty years - ours is almost 27... The slope of the land makes rain water pool around it - so it is LARGE AND IN CHARGE.

Some Arborists have told us that the tree is getting too big and since its so old, we should think about having it removed. BUT its soooo pretty and it definitely saves us on energy costs (it shades the entire front of our house) With that being said, It has caused some damage to ours and the neighbor's roof... SO something has to be done.
Someone came out and quoted us $500 to take the tree down and $300 to limb it up. Well that just didn't sit well with the hubs. He is so cheap thrifty that he decided we could do it ourselves... plus he could add a new chainsaw to his toy chest :)

Here he is, so happy about his new toy, but little did he know... 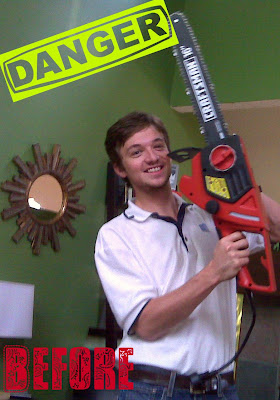 So we get up EARLY on Saturday morning to beat the heat - we start our limbing project at 7am and things are going great! We were on a roll and around 1:30 we were on the very last limb. This pesky limb was in a precarious spot, resting on top of the neighbor's roof! We rigged up a rope to the limb (we were so frightened of causing her house damage or knocking out one of her windows) and the hubs climbed up 10ft on the extension ladder and got to sawing...
Next thing you know - the limb snaps too early and the rope then snaps. I see the limb swing and knock the hubs off of the ladder and the chainsaw hits his wrist. He is lying on the ground when he sees the blood start flowing. In shock and pure terror, he starts yelling about how we have to get to the hospital. Luckily the neighbor heard all of the commotion and called 911... (this was a good thing because I swear I was running around in circles so frightened at all of the blood and hearing the fear in his voice... I had no idea what to do).

The EMS people got the bleeding to slow in minutes and I took him to the hospital. I was highly impressed with the ER we visited because they had us out of there in just under two hours! He got six stitches and will have a pretty bad ass scar (Sorry, Mom. Its the only word to describe).

He wanted me to show ya'll the pic taken at the hospital of the wound... but it is too graphic to show. Since the scar will be on his wrist, he is concerned that people will think he tried to do himself harm... yeah right!

So here is a much more tame pic for you guys. 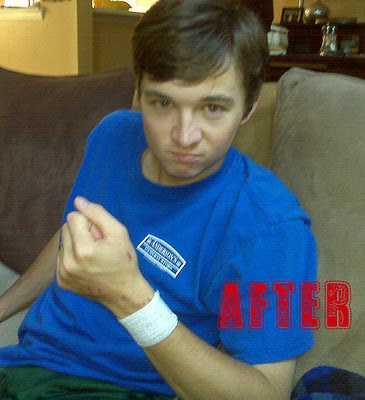 Moral of the story? DON'T GET ON A LADDER WITH A CHAINSAW! Leave that to the professionals (do you hear me, hubs??)!!

Thanks so much to those of you that sent messages and called to check on us - as you can imagine, it was quite a scary day for us... but as you can see - he is totally fine. But I really appreciate all of your kind words!

So, as you can imagine - with the hubs out of commission, its hard for me to get many projects done. But I did manage to recover my MaMa's footstool! I know its a small project, but at least I can cross it off of my list!

As little girls, we used to sit on this footstool beside my grandmother and just chat away! I have always loved it and it definitely reminds me of many sweet memories of her. I am so happy to have it in my house now! 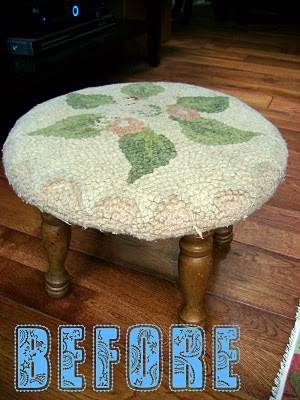 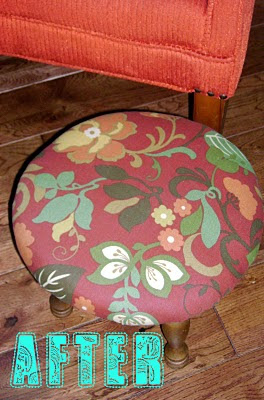 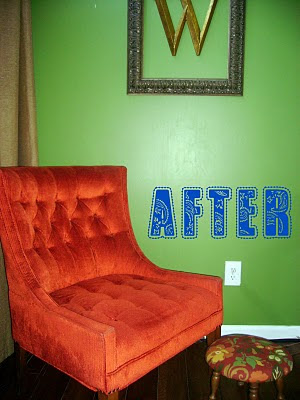 Now it sits next to my grandmothers chair in the corner of my living room! So happy to have given it a new home and a new life... but all the while remembering the memories that were made.

Sorry for another super long post. The hubs has promised me we can do some projects over the long weekend. Hope you guys enjoy the holiday!

As always, please send along any thoughts, comments, questions or suggestions! And if you have anything you want to share, please send it to me at brandi.wigley@gmail.com

It is always a pleasure to meet another southern belle. Thanks so much for stopping by Life of a Southern Belle. Bless your sweet husband's heart...probably hurt his ego more than his arm and "other parts!" I look forward to getting to know your blog better this weekend. Hope you'll stop by to see me again soon.